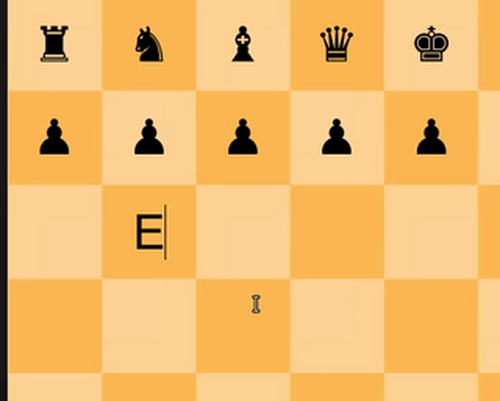 Progress has been slow.

Buuut, I feel like I've made some cool "discoveries" in my design at least. Discoveries, as in, I more or less stumbled upon these things while experimenting, rather than sitting down and designing them. Which is a form of design anyway I guess?

I've wasted a couple of uhh weeks, again, trying to code everything The Right Way and eventually gave up on that. Instead, I started hacking everything I can, taking every shortcut I can, and doing all the "low hanging fruit" first. So if I can, for example, do some variant with minimal code or project restructuring I just do it and move on to the next thing. Less than four weeks until I have to hand in this project, haha, ha...

I also realized I'm mostly cracking jokes at and for myself here. So if I design/make some joke version of chess that I find in some way funny, then that's reason enough for me to allow it to exist. I know it isn't a healthy way to work but I have to admit that I kinda have to do this to keep myself entertained and motivated to go through with the BA project. I know this is also somewhat of a "throw everything at the wall and see what sticks" approach, but that's OK, I think. It's better to be inclusive, because I can always discard and remove stuff later. Maybe I could reuse discarded variants in a hidden "b-sides" menu?

One variant that's not really a traditional joke (food for the main argument of my thesis, which is that there are new kinds of humor in games) is one I'm calling "Copy-Paste Chess". It just displays a chess board but the chess pieces on it are actually unicode chess symbols. When the player clicks on one of the chess pieces it turns out that every of cell of the board is a (HTML) text input field! Which means not only can the chess "pieces" be freely copy-pasted, she can also just write whatever she wants into the chess fields. I'm not sure why, but I find that very entertaining, and kinda fascinating from a capital-a-art/conceptual perspective? It's definitely my favorite variant yet.

Another new variant, called "GDPR Chess" (based on that now-infamous EU legislation regarding data collection), basically does a Geolocation check (which browsers and phones can of course do, with a user's permission). If the player is located within Europe the game just locks up and displays a message similar to the one the LA Times displays currently for all of Europe. Ironically I'm not even sure if I can legally do this now because that Geolocation check pings different services depending on Browsers and Platforms. Google's API if you're using Android / anything Blink / Chromium-based and Mozilla's Location Service if you're using Firefox... I think. At least I'm not the one collecting data, right?

I'm also breaking one of my rules here, which is that I don't put memes in my games ever, because I think that's a terrible way to date your work. These kinds of jokes just don't age well. But, for this one, and because privacy is a topic that's important to me, I'm making an exception.

Oh yeah and the game has some sweet (the worst) background chess music now.

Can you guess, without checking the credits, who made it?