how to use: pick what you like, disregard everything else

manifesto: steal from other manifestos until satisfied w the result

fuck subtlety. if the point you're trying to make can be read the opposite way by bad actors, you've failed. if you aren't fighting them, you're helping them

dont trust suits, exploit them anyway.
suits are evil but rich, and you gotta eat somehow. smile, nod, then do the exact opposite of what they're telling you. take their money, not their advice.

fuck the gamer pc über spec complex
this is an accessibility issue. aaa graphics are for suckers who want to help sell hardware. if the thing you're making won't run on a four year old laptop with integrated graphics, it might as well not exist

section 3 subsection 12: if your game is ios exclusive it doesn't exist

stop helping surveillance capitalism and dont do analytics of any kind.
better design through a/b testing is a giant scam, a steaming pile of self-delusion invented by greedy businessmen. don't collect anything. data can't be anonymized. if data exists, it will be exploited.

question your motives when posting. tweeting a gif of your game and getting a ton of likes and retoots feels great, but will drain your motivation in the long run. promote your work as much as you want to, but take the time and find out if you're only doing it for the validation

fight nihilism in all its forms. twelve hundred levels of irony might be funny to you, but devastatingly harmful to the uninitiated. feel things. teach empathy. in a world that teaches us that 'giving too many fucks' is cheesy and uncool, caring is a radical act

people who want to argue with you about the merits of our current, grotesque implementation of copyright probably work for disney in some form or another

make art, not products. make imperfect things and release them anyway. use your hands. make trash. make a game as a gift for someone. make a joke and call it a game out of spite

(not """making""" anything is ok too. you are not your productivity)

not going to festivals, not making any money, not going to all the parties, not winning any awards, not being on any lists, not making it out of bed sometimes; none of these things make you any less legit

never make your magnum opus, ever. ten day projects are better than ten-year projects. small projects are self-care. don't sacrifice your physical and mental well-being trying to become [your idol], who is just a human being you don't know

all of our past selves are dead. we've killed them, we danced on their graves, and we don't owe them anything 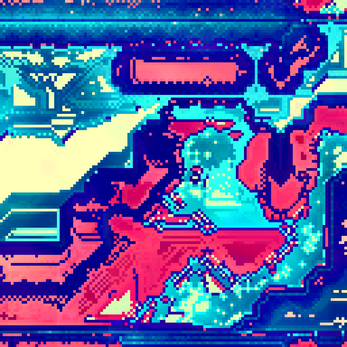